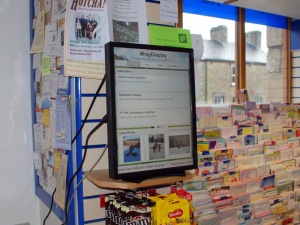 My PhD research at Lancaster University centered on the design and deployment of public situated displays in Wray, a small village in North West England.

This research had two strands:

We worked closely with residents over four years to iteratively develop public displays, beginning with the Wray Photo Display, a very simple prototype designed to act as a technology probe, which eventually led to WrayDisplay, a fully-featured digital noticeboard. Over this time, displays were deployed in the village’s shop, community centre, café and pub, where the were used to collect thousands of photos covering all aspects of village life. Particularly successful was the collection of historical photos of Wray, many of which were made public for the first time via the display.

Although active research on the project concluded in 2010, we continue to reflect on our experiences in Wray, particularly the process and ethics of handing over a research prototype to the community in a sustainable manner. Aspects of this research have also fed into the subsequent SHARC project at Lancaster, exploring the use of technology for shared curation of local history.