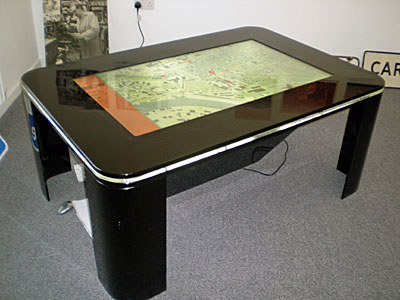 Byker Lives was a Lottery-funded project run by Northern Architecture, who worked with residents in the Byker area of Newcastle to develop their own story of the history and heritage of the community and particularly its redevelopment in the 1960s. This had the ultimate goal of helping residents to both appreciate the architectural significance of the estate and find ways to benefit from it. Part of the project was the development of a community heritage centre in an unused shop on the estate itself, which would bring together content from a variety of sources.

The Byker Lives Table was designed to display content that could not be physically displayed due to space constraints. Much of this content took the form of photographs donated by local residents. Visitors could bring photos to the centre, where they were assisted in scanning them and uploading them onto the table. The table itself was a large interactive map of Byker, with uploaded photos, videos, audio recordings and text entries ‘pinned’ to specific locations.

We were particularly interested in the process of co-curation between staff at the heritage centre and visitors. The exhibit occupied a nebulous space in between a museum experience and a community archive and also needed to reflect many conflicting viewpoints around Byker’s history. We observed various ways in which the table could support meaningful discussion and reflection around various aspects of the community’s past.