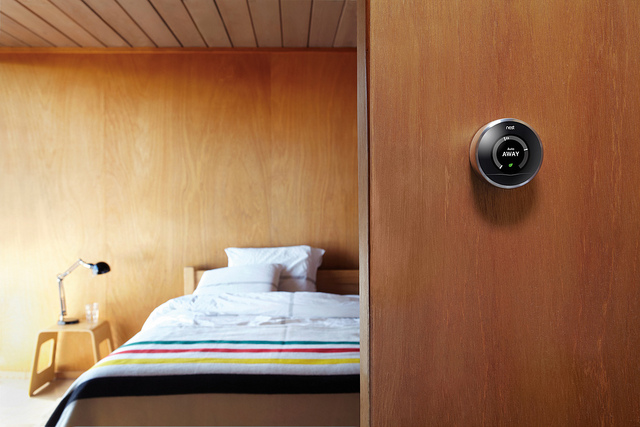 Just before Christmas, I got a Nest installed. I’ve only lived in a house with a thermostat for one glorious, cosy year out of 12 years of renting, so this was kind of a big deal. Never again would unpredictable British weather and a mechanical timer thwart my attempts to be vaguely comfortable. My energy bills would surely plummet.

I hadn’t counted on quite how simple the Nest was. On the one hand, this is a triumph—but usability is easier to accomplish if you keep the feature set small, and that’s certainly what Nest has done. It’s billed as a learning thermostat, so the idea is that it learns your routine and sets the schedule accordingly. But if you do want to take control yourself, the Nest offers remarkably few features or access to your data.

There are lots of reasons why you might want to do this. I have some obscure electric meter with off-peak hours spread throughout the day (early morning, late afternoon and late evening), so bringing the flat up to temperature in the afternoon while I’m at work and letting it cool until the off-peak rate kicks back in can potentially be cheaper than heating at home time. Nest would quickly figure out I was at work during the off-peak period and tweak my schedule to turn on later at peak prices.

This is probably a niche requirement, so fair enough so far. But when you turn off the auto scheduling features and use a fixed schedule, you lose access to almost every other smart aspect of the thermostat—and more importantly, all the knowledge it has gathered. For example, the Nest knows how long it’s going to take my house to heat up, which is factored into its auto scheduling, but it doesn’t allow me to leverage that knowledge if I insist on doing something exotic like maintaining a manual schedule*. Nest has a backlog of data about the temperature of my flat, but it doesn’t let me see even the simplest graph showing temperature against heating to help me make decisions. It’s Nest’s way or the highway.

* This is in fact possible. It was hidden away under the name “True Radiant”.

I have an arrogant thermostat.

A large part of the Internet of Things vision is systems that behave exactly like this: using sensors and data to make intelligent decisions without the need for a human to intervene. But is arrogance an unavoidable consequence of smart objects? Does delegating control have to mean ceding it completely? To my mind, a smart thermostat should mean you don’t have to be smart, but it shouldn’t mean you can’t be. So what are the alternatives?

There is an API, but for whatever reason, there doesn’t seem to be a thriving ecosystem of apps and Nest doesn’t seem in a hurry to advertise anything except products from commercial partners. Skylark seems pretty useful, and adds the curiously absent ability to make decisions based on your smartphone’s GPS location. Other than that, most apps seem to replicate the functionality of the Nest app itself. Maybe this will change, but for the time being you’re stuck if you don’t have pretty good dev skills. So what about everyone else?

What if Nest wasn’t a learning thermostat, but a teaching one? A teaching thermostat might help me to understand the behaviour of my flat and heating system under different conditions and make informed decisions. It could help me to decide whether I should heat my flat during that off-peak period or just wait until later. It could help me to balance comfort with cost and with sustainability. It would do the hard work, but it would give me meaningful ways to input into that process. Deciding my schedule would be a collaborative process.

That’s just one possibility, and maybe the app ecosystem will perk up and help fill in these gaps. But for now, my smart thermostat is just a pretty thermostat.