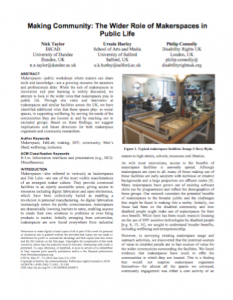 We’re very happy to have had a paper accepted into CHI 2016 based on the makerspaces survey we carried out in the early stages of In the Making.

Makerspaces are a growing resource for amateurs and professionals alike. While the role of makerspaces in innovation and peer learning is widely discussed, we attempt to look at the wider roles that makerspaces play in public life. Through site visits and interviews at makerspaces and similar facilities across the UK, we have identified additional roles that these spaces play: as social spaces, in supporting wellbeing, by serving the needs of the communities they are located in and by reaching out to excluded groups. Based on these findings, we suggest implications and future directions for both makerspace organisers and community researchers.

We found evidence of four roles played by makerspaces in their communities:

Social spaces. Although there is often an emphasis on the equipment (at least from external parties), makerspaces themselves valued the community within the space more than anything else. The equipment was seen as a hook, and often something that could easily be replicated at home, while the community within the space was something people stayed for.

Serving local needs. There was a lot of evidence to suggest that makerspaces tailor their offerings to the local area. A number were located in areas with high unemployment and saw themselves as providing skills that would be useful to nearby industries, including through formal internship and training. One of the most notable examples was in Northern Ireland where makerspaces were set up by the government as part of the reconciliation process.

Wellbeing and empowerment. We found many examples of makerspaces acting as safe, creative spaces where people could express themselves and develop skills and confidence. As well as ‘proper’ makerspaces, we visited a Men’s Shed that best exemplified this, having a explicit but covert goal of supporting mental health in older men.

Widening access. Finally, all of the makerspaces were engaged in some form of outreach that attempted to make their facilities accessible to people who fell outside the maker stereotype, including children and disabled people. However, real challenges exist in making this a reality, including a lack of resources and deeply ingrained beliefs in excluded segments of society about whether they ‘fit’.

I’m also currently advertising for a PhD student who will pick up this thread of work and continue examining the different ways that makerspaces and Men’s Sheds can support community and wellbeing. This paper is really only a starting point, indicating surface-level areas of opportunity, and there is much more work to be done in understanding these opportunities and how we can harness them.

Over the past three months, I’ve been doing site visits to maker and hacker spaces across Scotland. For the first phase of In the Making, we’re surveying existing facilities in the UK to identify what opportunities and challenges they might present to disabled users. 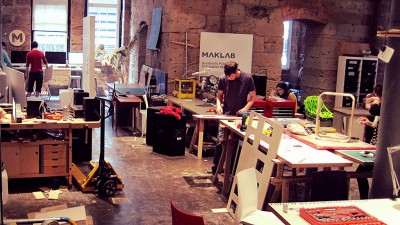 It quickly became clear that makerspaces fell into two categories. There are large and (reasonably) well-resourced commercial spaces that act as service providers, aiming to make digital fabrication tools available to a wide range of people. Then there are smaller, less well-resourced community spaces started by groups of enthusiasts who primarily want a space to meet like-minded makers. But there’s also a gradient between the two categories, and it’s clear that some of the smaller spaces have the ambitions to grow and reach a wider audience.

What we haven’t found is many examples of makerspaces being used by disabled people, which was perhaps to be expected. There are some examples of DIY assistive technologies being built, most notably in the form of 3D printed prosthetics, but we’re interested in what usage might exist beyond assistive technologies. What we did find is a lot of examples of spaces large and small reaching out to wider audiences, including people with disabilities, through public events, mobile facilities and partnerships with various organisations. But resourcing these outreach activities was a struggle, especially for the smaller spaces.

I was particularly drawn to the therapeutic aspects of craft and making. This was evident in collaborations between makerspaces, arts organisations and disabilities charities, where the act of making is found to be much more important than what is made. But it was also evident in the community spirit of the smaller makerspaces, where the value of having the space and collocating otherwise solitary activities far outstripped the value of the activities themselves. Happily, my final visit underlined this spectacularly. 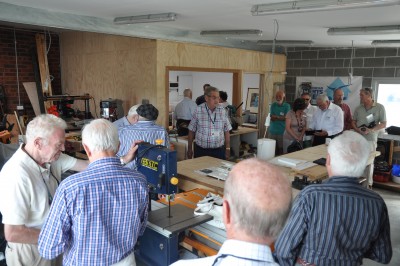 Westhill Men’s Shed is part of an international network of sheds where men, mostly retired, come to work on projects in the workshop, but they also come to chat, play cards, drink tea, take cookery lessons and use ICT facilities. Underpinning all of this is a focus on mental health and emotional wellbeing—although this is not foregrounded due to the stigmas attached, particularly in the eyes of older men.

When I visited on a Friday lunchtime, the Shed was far busier than any makerspace I visited with somewhere between 12 and 20 members present. The wellbeing outcomes that they have seen are astounding. An analysis by the Scottish Men’s Shed Association has shown a tenfold return on investment, as members are happier and healthier, requiring and finding themselves requiring less medication. Individual stories are no less remarkable—men who have retired or lost their wives, given a lifeline and a new sense of purpose. Just as impressively, the Shed has become self-sufficient by selling the things they make and upcycling donated tools.

Beyond the amazing qualities of the Men’s Shed, what struck me most was the similarity to many of the makerspaces that I’d visited, particularly the smaller ones. The tools—and the attendees—might be a bit more old-school, but in both cases, the existence of the workshop itself was incidental—what was important was that it brought people together. I thought it was interesting that by targeting a particular community with shared experiences and issues, rather than a particular set of fabrication technologies, Men’s Sheds had been able to propagate across Scotland much faster than makerspaces. I think makerspaces could probably learn a lot from what they’ve achieved.

With the first stage of the project complete, we’ll be applying what we’ve learned to a series of workshops with disabled people in Salford through the second half of the year. A launch event for the programme will be hosted in the BBC’s MediaCityUK building at the end of July.