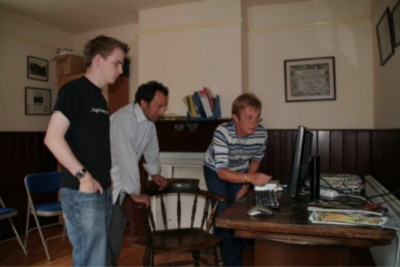 I still don’t really know how to stand normally.

On August 10th 2006, we deployed the first version of the Wray Photo Display in a side room of the village hall, which was at the time mostly used as a waiting room when the doctor visited.

The software was pretty stable, I thought, but I’d soon learn that was rarely the sticking point when it came to deploying things in public spaces. We spent much of the time trying to figure out how to get into a locked cupboard that housed all the networking equipment, while a visiting German researcher, whose name I forget, took me to one side and conspiratorially suggested “there is a way to unlock doors without a key… I have seen it in movies.”

It was the best day ever.

The Start of Something 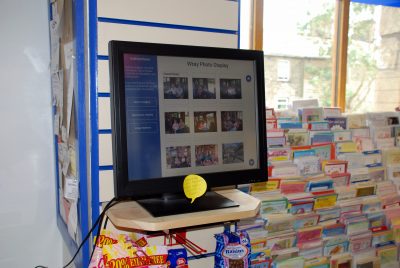 As a fresh computer science graduate, I’d been hired for the summer to repurpose the existing Hermes Photo Display, which had been used internally in the Computing Department, into something that could be deployed in a nearby village. Wray had been working with other academics in the department on deploying a wireless mesh network, so goodwill in the community was high and we had a network infrastructure that was (mostly) capable of supporting deployments. So we strung together a gallery of photos programmed in Java, a bit of ropey Bluetooth file transferring that nobody would use, and a simple web interface for uploading photos, and figured we would just see what happened.

We were not quite the first people to take public displays out of offices and into community spaces (e.g. EyeCanvas), but we weren’t far off. The first wave of public displays stuff had really peaked a few years earlier, but it was just becoming possible to take deployments out of semi-controlled environments: decent sized terrible touch screens were just about affordable, wifi was just about available, and phones were, if not smart, then at least not entirely stupid. So the time was right for what I think of as a second wave of public displays research that was able to go properly ‘in the wild’.

It would also turn out to be the start of my research career. As well as exposure to a research environment, what really got me hooked was building something that people actually used—and with enthusiasm no less. Working with the community over the subsequent month or so to rapidly iterate the prototype was incredibly rewarding, as was the feeling of having contributed something, no matter how trivial, to the community. It was some time before I realised this was not how all research was conducted, although I haven’t let that detail bother me since.

I try not to write or gives talks about Wray much anymore, because I feel like we flogged that deployment pretty hard. Looking back, if I’m honest, most of the interesting findings came out of that first year of deployment, and I would definitely have approached a PhD around it very differently. But I’m still more proud of that piece of work that anything I’ve done subsequently, and the fact that the display is still being used a decade later boggles my mind a little bit. I don’t think there are many bits of work in HCI that can claim that distinction!

As the deployment went on it became clear that were were some big question to be answered about how we end a project like Wray after five years of regular engagement with the community. They valued the display and had put a lot of effort into curating the content they’d uploaded, but I was about to leave Lancaster and had pretty much squeezed out every drop of research I could. The system was stable, but it could never stay that way (and as sod’s law would have it, the hard drive failed within weeks of me leaving).

We summarised those issues in our Leaving the Wild paper, which provided a launching point for my recent strand of research around DIY, makerspaces and hackathons. These projects are really about asking how communities can be empowered to build something like this for themselves. The display had such a positive role on the community, but there’s really nothing there that couldn’t now be hacked together with a Raspberry Pi and a Flickr stream. Same deal with Viewpoint. In an idea world, that kind of technology should be within reach of any community, not just those that have a relationship with the local university.

As for the Wray display itself, last I heard it was still out in the community, now located in the village pub rather than the shop. It’s once again in active use for research, being used by the SHARC project to explore locative community heritage, and another PhD student is beginning their journey in Wray. 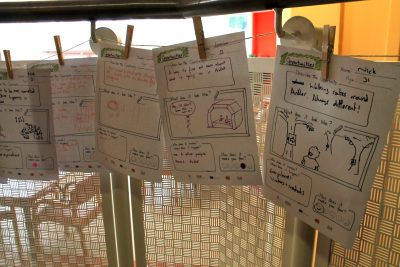 When you’re doing research with communities, the first event is always the most nerve-wracking. You’ve made all the contacts, been to the community festival, dished out a small forest’s worth of flyers and posters, bought plenty of biscuits.

But will anyone actually turn up?

Repurposing Hackathons for Everyone

The Ardler Inventor Days are being run as part of the EPSRC Hacking for Situated Civic Engagement project. The idea is to investigate whether hackathons—intensive bursts of creative tinkering with technology—could be used to support communities in developing unique technologies to serve their local needs. Working with Dundee’s Ardler community over a series of three events, we’ll be trying to bring people from Ardler together with researchers and makers to share knowledge and imagine new ideas. 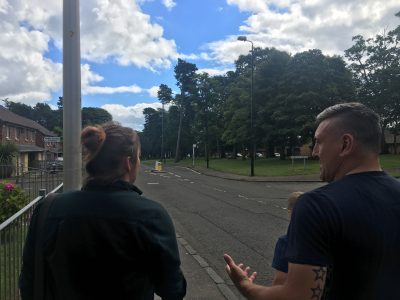 Hackathons are usually the domain of techies and programmers, but we want to find out if we can take the basic idea out into communities, tweak it a little bit, and use it as a way to unlock creativity and build relationships that will last much longer than our research project.

As it happened, the turnout for the first Ardler Inventor Day last weekend was about what we’d hoped. About eight people joined us in the Ardler Complex: young and old, father and son, mother and daughter, even three generations from one family! Along with Loraine and me from the university, and three or four friends from the maker community, it made for a group that was a little more intimate than your typical hackathon, but that we thought was the perfect scale for a meaningful community event. 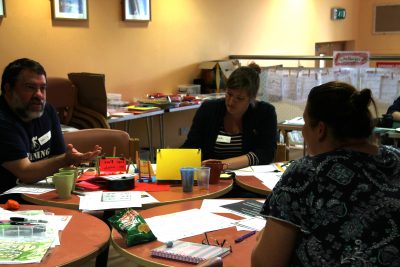 I don’t think anyone knew quite what to expect (including us), but after an ice breaker to get people’s creative juices flowing—teams were challenged to build the tallest Marshmallow supporting structure they could using just spaghetti, tape and string (hint: triangles are your friend, but build the base nice and wide)—and some demos of creative technologies from our makers, we were ready to go.

The other big unknown about this first event was: will anything useful come out of it?

It’s hard to know how people would respond to the event we’d put together and how successful we’d be in getting people’s creative juices flowing. At most hackathons, everybody there knows roughly what to expect, and they’ve probably been to hackathons before. But outside of that community, most people aren’t used to being creative on demand. 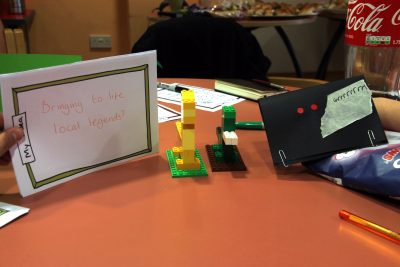 After guided tours round the community, it was clear we needn’t have worried. From traffic problems and safe routes to school, to the things that were lost when the estate was rebuilt, through to Ardler’s famous Santa’s grotto and local legends about witches and crocodiles, the things that were emerging were a mix of the issues faced by communities up and down the country with things that had a unique Ardler flavour.

Add a lot of craft materials and a bucket full of Lego, and things began to move along on their own accord. There was a lot of richness in the things that were coming out of the workshop and we’re already excited about picking these ideas back up at the next Inventor Day… and trying hard to remember we’re not supposed to be coming up with things ourselves!

The second Ardler Inventor Day is less than two weeks away, on August 27th at the Ardler Complex. Next time, we’ll be developing some of the ideas further and beginning to play around with some technology. If you live in Ardler, if you’re involved in the Ardler community somehow, or if you’re a maker or creative from anywhere in Dundee, get in touch if you’d like to join us for the next event, and see what can create together!